St. Patrick’s Catholic School is named ONE OF THE BEST IN THE NATION 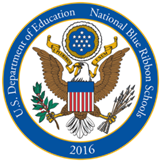 THE NATIONAL BLUE RIBBON SCHOOLS PROGRAM has honored and recognized great American public and private elementary, middle, and high schools since 1982. A National Blue Ribbon School flag waving overhead has become a trademark of excellence, a symbol of quality recognized by everyone from parents to policy-makers in thousands of communities.

AdvancED is the largest community of education professionals in the world. AdvancED is a non-profit, non-partisan organization that conducts rigorous, on-site external reviews of Pre-K-12 schools and school systems to ensure that all learners realize their full potential. AdvancED is commited is to helping schools improve.